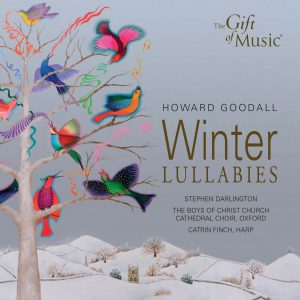 Almost everyone knows at least one of Howard Goodall’s many TV themes, from The Vicar of Dibley and Blackadder to Q.I. and Mr Bean, and his BAFTA-winning Channel 4 documentaries on music have been acclaimed throughout the English-speaking world. His stage musicals have also won him awards on both sides of the Atlantic and a week has not passed in 5 years without one of them being in production somewhere; between late 2006 and early 2008 he will premiere no less than 4 major newly-commissioned musicals. Musical training began at choir school in Oxford and he has maintained strong links with choral music, and particularly with Christ Church Oxford, of which he is himself a graduate, throughout his career. His In Memoriam Anne Frank was the musical centrepiece of the inaugural National Holocaust Memorial commemorative concert, O Lord God of Time and Eternity was commissioned for the national service of remembrance following the Iraq war at St Paul’s Cathedral, his Psalm 23 has been at or near the top of the best-selling choral sheet music in the UK for 10 years, and Refuge, for the Youth Music Singbook, has been performed in its first year of publication by over 40,000 young singers. He chairs the National Vocal Strategy on behalf of Youth Music and the Music Manifesto.

Winter Lullabies, for solo harp and boys’ voices, comprises six loosely-interwoven movements, and despite Thomas Campion’s jovial toast to the delights of winter with which it begins, the texts mainly centre on the hardship and the challenges of winter, particularly for mothers and their infants. The core of the work is a specially-written text in English and Gaelic, Crossing the border, by Irish poet Theo Dorgan. Whilst the central theme of the cycle associates secular issues of homelessness, displacement and flight with the Christian nativity story, there is also a general celebration of motherhood and the different moods that might be embraced by a lullaby. With this in mind, the composer has even revisited Josef Mohr’s familiar text Stille Nacht, attaching to it a more dance-like musical texture than the well-worn Franz Gruber original. Two anonymous lullabies, one joyful the other sorrowful, from very different continents and centuries, are juxtaposed in the second half of the cycle, and the whole piece concludes with Lullaby of Winter, to Goodall’s own text, knitting together lyrical and musical ideas from the previous songs. Winter Lullabies was commissioned by Christ Church Cathedral Choir, receives its world premiere with Catrin Finch on this CD, and it was conceived with the richly robust, rhythmically energetic voices of Stephen Darlington’s boy choristers very much in mind.