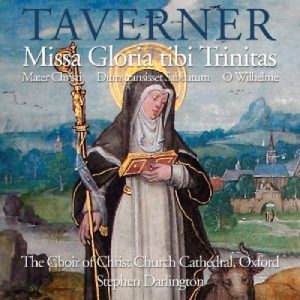 Sanctus Agnus DeiJohn Taverner’s Mass is generally regarded as his finest work which shows complete mastery of structure and polyphony in six parts. It is the first of the eleven mass settings in the Forrest-Heyther part-books, almost certainly collected together for use in Wolsey’s chapel. The recording is the first to use the original forces of men and boys as envisaged by the composer and is on the top record label Avie Records. It has been sponsored by the Friends of the Cathedral and is available from Christ Church Cathedral Shop (01865 201971) and all good record shops.

John Taverner, the most outstanding English composer of his time, was appointed Informator Choristarum of Cardinal College, Oxford in 1526, with the charge of establishing the foremost choral institution in the land. He succeeded magnificently and the tradition continues to this day at what is now known as Christ Church, Oxford, with acclaimed director Stephen Darlington, renowned for his strength in 16th century choral music, at the helm. Darlington and his forces – 16 boys and 12 men, unchanged since the 1520s – pay homage to their predecessor with a programme of his liturgical music written at Oxford. While there, Taverner had to write music to be performed virtually round the clock and he rose to the challenge using great imagination. He wrote innumerable memorable melodies, with an unprecedented emotional range and a sophisticated sense of drama. His music was astonishingly modern for its time, and in its richness remains much so today.

The Choir of Christ Church Oxford has a special and distinctive place within the great English choral tradition as it uniquely serves both an Oxford college and a diocese. With an unbroken, continuous tradition of glorious music-making for nearly five hundred years, today the choir is renowned for its vibrant sound and artistic versatility, qualities that have been praised throughout the world from Sydney to Rio de Janiero, Tokyo to New York, Helsinki to Paris. Apart from their Oxford duties and international tours, the Choir has been heard by millions on the Mr. Bean soundtracks and Vicar of Dibley TV theme tune!