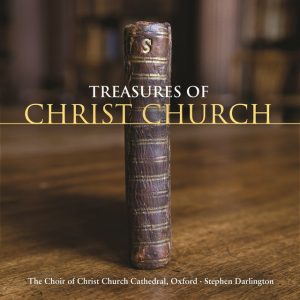 Treasures of Christ Church is a newly recorded, special collection spanning 500 years of English choral music performed from original manuscripts, uncovering the unique history of music at Christ Church, Oxford. All of the composers on Treasures had an association with Christ Church (whose hallowed halls were famously seen in the Harry Potter films), stretching back to the tenure of John Taverner, through Tallis, Handel, Purcell and Byrd to present day world premiere recordings of works by John Rutter and Howard Goodall.

The history: John Taverner, the most outstanding English composer of his time, was appointed Informator Choristarum of Cardinal College, Oxford in 1526, with the brief of establishing the foremost choral institution in the country. He succeeded magnificently and the tradition continues to this day at what is now known as Christ Church, Oxford. The Choir maintains a special and distinctive place within the great English choral tradition, with an unbroken, continuous tradition of glorious music-making for over five hundred years. Today the choir is renowned for its vibrant sound and artistic versatility, qualities that have been praised throughout the world.

ABOUT THE TREASURES OF CHRIST CHURCH
George Frideric Handel (1685-1659) Zadok the priest
The great German composer spent most of his working life in England. In 1733 he performed Acis and Galatea in Christ Church Hall. The manuscript of his organ arrangement of the orchestral accompaniment to the Coronation anthem Zadok the Priest dates from the 1760s and is in the College Library.

William Walton (1902-1983) Set me as a seal
William Walton was a boy chorister in the Choir at Christ Church from 1912 and entered the College as an undergraduate in 1918.

Henry Purcell (1659-1695) O God thou art my God
Purcell was organist at Westminster Abbey. This anthem exists in a manuscript copy made in the 1740s by the composer William Walond, and is in the College Library.

Robert Parsons (c1530-1570) Ave Maria
Parsons was a Gentleman of the Chapel Royal from 1563. As a composer he was an important precursor of William Byrd. Ave Maria comes from the Dow part-books which date from the 16th Century, and are in the College Library.

Benjamin Britten (1913-1976) Shepherd’s Carol
Words by W H Auden (1907-1973)
The poet W H Auden was an undergraduate at Christ Church, reading English Literature. He was a devoted member of the College and it influenced deeply throughout his life. Benjamin Britten’s setting of A Shepherd’s Carol was written for a BBC radio production entitled ‘A Poet’s Christmas’.

Herbert Howells (1892-1983) Like as the hart
dedicated to Thomas Armstrong (1898-1994)
Thomas Armstrong was the dedicatee of Howells’ setting of verses from Psalm 42. Armstrong was Organist and Choirmaster at Christ Church from 1955-1968 before becoming Principal of the Royal Academy of Music.

John Taverner (c1490-1545) Christe Jesu, with the Elizabeth text as in Christ Church source
Taverner was the first Director of Music at Cardinal College (now Christ Church) Oxford in 1526. Christe Jesu was sung daily in the College Chapel. This particular edition includes an invocation for the protection of Queen Elizabeth I, so is an adaptation of the original version. The manuscript comes from the Baldwin part-books dating from the latter part of the 16th Century. These are in the College Library.

Peter Warlock (1894-1930) Bethlehem Down
Peter Warlock is best known as a consummate composer of carols and songs although he wrote a great deal of other music. He was an undergraduate at Christ Church in 1913/1914.

Orlando Gibbons (1583-1625) Great Lord of Lords
Orlando Gibbons was born in Oxford and received his Doctor of Music in Oxford in 1622. The manuscript-score anthem book dates from the 1620s and contains an early version of this anthem, which is in the College Library.

Thomas Weelkes (1576-1623) Hosanna
Thomas Weelkes was one of the outstanding composers of the Jacobean period. His setting of Hosanna to the Son of David is in manuscript in a set of five part-books dating from around 1620 in the College Library.

Digital Bonus Track:
Purcell Thou knowest Lord
An anthem from the burial service written for the funeral of Queen Mary II in 1695. It is in a printed manuscript dating from the period in the College Library.

More Divine Than Human: Music from The Eton Choir Book
Scroll to top