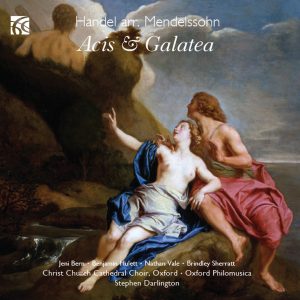 Handel wrote the masque Acis and Galatea in 1718 for the Duke of Chandos to words by John Gay. Like the set of anthems composed at that time for the Duke it required only modest forces – five singers, four of whom sang the solo parts, two woodwind players doubling oboes and recorders, two violins and continuo. His later revisions did not fundamentally alter its scoring even when more performers were involved. Mozart provided additional accompaniments in 1788 for a performance in Vienna. In 1828 Mendelssohn, at that time a student at Berlin University, was asked to make a version for a performance by the Singacademie. It appears that it may not have been used by them and that the first use of it may have been in London in 1869 conducted by Sir Joseph Barnby. Novello’s vocal scores from that period offer orchestral parts for sale of both Mozart’s and Mendelssohn’s versions, as well as the composer’s original scoring but performances of Mendelssohn’s version seem to have been rare.

In arranging the work Mendelssohn added a viola part and parts for woodwind and brass, in part simply filling in the continuo harmonies. However, like Mozart, he went further than that and rewrote, shortened, occasionally extended and more often omitted numbers. “Hush, ye pretty warbling choir” is subject to a simplification of the figuration as well as additional woodwind lines. “Happy we” is extended, and in several numbers the second violins are given an independent line. Mendelssohn wrote for performance in German but the original English text is used in this recording.

The present recording is described by the conductor as “a true Oxford project”, with performers drawn from that city and making use of the arranger’s manuscript now in the Bodleian Library. In a word, it is magical. There is a freshness about this performance which is wholly enchanting. The bass line is kept firm but light, a crucial requirement in Handel, and rhythms bounce along, avoiding any of the kind of heaviness fatal to the music. The soloists are well chosen, all characterising well, especially Brindley Sherratt as Polyphemus. The choir are admirable, even if their pronunciation in “Oh the pleasure of the plains” suggests that they are particularly well bred shepherds. This actually adds to the listener’s pleasure in stressing the delicious artificiality of the whole work. I have not heard the Oxford Philomusica before. They are apparently a professional orchestra based in Oxford, and as heard here they deserve a much wider audience.

Nimbus have done all in their hands that is necessary for the listener’s pleasure by providing a model booklet, with a lengthy essay by Peter Ward Jones, the complete English text and good notes about the performers. With Mendelssohn’s help they manage to get it all on a single disc. Obviously this disc supplements rather than replaces versions of Handel’s original, but as a change for the listener and as a delightful work in its own right this is one of the most enjoyable recordings I have heard for a long time.

Choirs of Angels: Music from the Eton Choirbook, Vol. 2