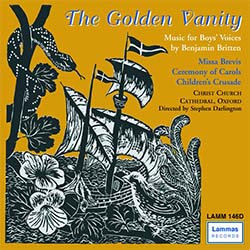 Benjamin Britten was renowned throughout his life as a prolific composer of children’s music, and his affection for young people and interest in their world was a defining characteristic of his personality as an artist. In addition to this he showed an enduring affinity for choral writing, and – combining these two interests – the pieces on this disc represent some of the best examples of his music for young voices. Britten began writing for choirs whilst still at school, including in his early output such works as the Hymn to the Virgin and A Boy was Born. He never compromised his often highly modernistic style when writing for young performers, and always managed to challenge his singers’ technical abilities as well as cover a broad spectrum of emotions in his works for children.

The Golden Vanity was composed in 1966 for performance by the world-famous Vienna Boys’ Choir, who commissioned it from Britten and went on to perform it at the Aldeburgh Festival. A vaudeville on the old English ballad of the same name, the work’s double chorus of trebles tells the story of a sea battle with Turkish pirates, the humble cabin-boy who saves the day, and a treacherous sea-captain who refuses to keep the promise of his daughter’s hand in marriage and lets the hero drown. The music is permeated by folk-like shapes that bring to mind traditional English sea-shanties, although an undertone of dissonance and chromaticism reminds us that the story is in fact a dark one of betrayal and death. In his use of folk-song idioms Britten shares an interest with older composers such as Vaughan Williams, but the melodies are treated in a very different manner from the style of his predecessors. The work’s pungent harmonies (including abundant semitonal clashes in the piano part) help to create an uncomfortable and at times even raucous effect. Although The Golden Vanity initially appears to be a more lighthearted work than the Children’s Crusade, we are nonetheless presented with a tragic, typically Britten-esque hero; the lonely, suffering boy, abandoned by all those around him. It is worth noting that Britten’s own schooldays were deeply unhappy, and it is probable that feelings about his own lonely youth are reflected in music such as this.

A Ceremony of Carols is written in a very different vein from the Children’s Crusade and The Golden Vanity, possessing as it does rather more of a sense of innocence and bright exuberance. The dissonance level is much lower in this earlier work, but although imbued with energy and brim-full with singable melodies there are also numerous effective passages of a more reflective nature. Written in the depths of wartime, this is undoubtedly Britten’s most famous work for boys’ voices. Nonetheless, although the piece is scored for a three-part choir of trebles with harp accompaniment, its first performance – in Norwich Castle in December 1942 – was given by the women of London’s Fleet Street Choir. Britten composed much of A Ceremony of Carols whilst travelling back from America to England by ship, and his choice to write what has come to be seen as such a self-evidently ‘English’ work can be interpreted as an expression of his feelings on returning home after his exile. Setting early carol texts, Britten creates a wide range of effects from his little group – different movements feature soloists (including the particularly haunting This Yongë Childe), playful rhythmic writing (Adam lay i-bounden) and the use of canon (in the bravura choral showpiece, This little Babe). Unifying the whole cycle is the plainsong antiphon, Hodie Christus Natus Est, an ancient chant from the Christmas liturgy. The antiphon can be heard here in the Procession and Recession, and is also subtly featured in the improvisatory harp Interlude at the heart of the work….