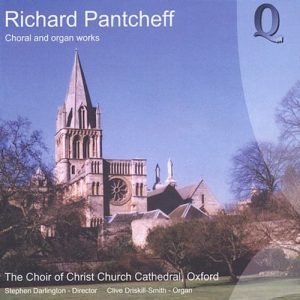 Richard Pantcheff has established himself as one of the UK’s leading composers of Choral and Organ music, with a succession of commissions and performances of his work in major English and Scottish cathedrals, colleges, and schools, as well as in many churches in Germany and the USA. A substantial proportion of his output is published, distributed, and performed around the world.

The works featured on this CD were written in three places which have proved to be particularly conducive to musical composition: Whitchurch, Hampshire (where the composer was Director of Music at All Hallows’ Church from 1989-1993); Frankfurt am Main, Germany (where he was Assistant Organist at the Episcopal Church, from 1993-5); and Oxford, where he now devotes his time to freelance composition.

An Oxford Evensong
Scroll to top