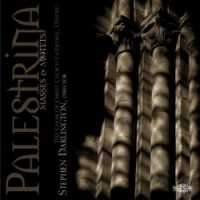 This disc is not new, having been recorded fifteen years ago, perhaps unusually not in Christ Church but at Nimbus’s HQ in Wyastone Leys in Monmouth. The core of the recital consists of two major masses. The six-partMissa Ecce Ego Joannesexemplifies the concentration on homophony and repetition that informed Palestrina’s settings, and is couched in self-confident, flowing, overlapping lines excellently realised by the Christ Church choir, where purity of voice production in the trebles is sorely needed – and achieved – not least in the difficultCredo. Stephen Darlington takes theBenedictusat a fine, forward-moving and very plausible tempo, and the work is realised with precision and authority.

Missa Pater Noster,in four parts,is a more interiorised setting, but it too is interpreted with a fine sense of restrained elegance. Noteworthy in particular is the attention given to the breadth and amplitude accorded to theHosanna in excelsis, where Darlington ensures that a strong contrast is made between it and the openingBenedictus qui venitwhich he directs with refined articulation.

The disc is also notable for three other works, including two motets. The first of the two isLaetamini in Dominiand it’s a compact and vital setting, the imitative writing being clearly depicted and relished. A more reserved setting isJustorum Animaethough its well-sustained sense of meditative plasticity is finely modulated. FinallyPater Nosteris a five-voice setting published in 1675 based on – but otherwise unrelated to – the same plainchant that Palestrina used for his mass of the same name.

These light, brightly projected performances are very satisfying indeed. I wasn’t sure how I would react to the new Wyastone acoustic but in the end I’m a convert. It has air but doesn’t billow.
Jonathan Woolf