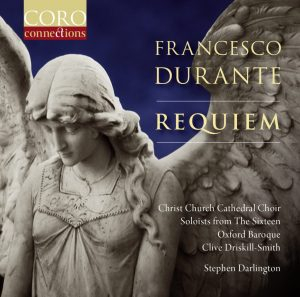 In an exciting new collaboration, Christ Church Cathedral Choir joins forces with soloists from The Sixteen and Oxford Baroque on this new recording of Francesco Durante’s Requiem Mass in C minor.

Despite its enduring popularity in the 18th century this beautiful and majestic work was never published but survives through over 50 manuscript copies scattered across Europe. It is a remarkable work which can justly be described as one of the most important orchestral Requiem settings of the 18th century. This is the premiere recording of Stephen Darlington’s new edition of the work which shows Durante to be a composer of considerable skill and invention, who combined his mastery of counterpoint with an elegance of melody, a richness of harmony and an imaginative instinct for structure.

This album also features Durante’s exquisite Organ Concerto in B flat major – a rare example of an Italian keyboard concerto of the period – performed here by celebrated organist, Clive Driskill-Smith.

The Sun Most Radiant: Music from the Eton Choirbook, Vol. 4
Scroll to top